JUKI launches the new “AMS-221F Series” computer-controlled cycle machine with input function that improves seam quality and conducts production control through the interaction between the sewing machine and the JUKI’s exclusive application software. 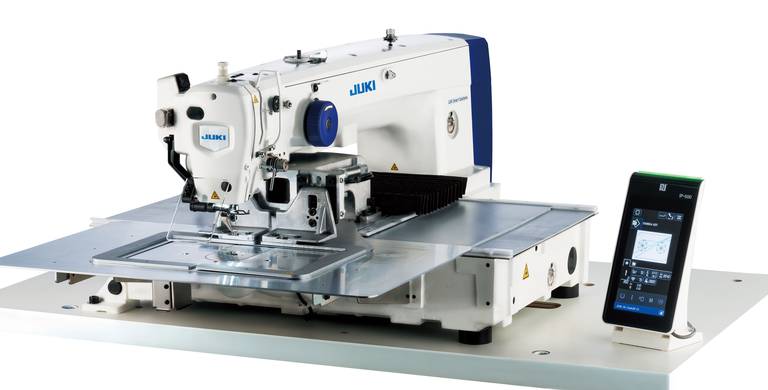 From the 11 of April, JUKI launches, both in the domestic and overseas markets, the new “Computer-controlled cycle machine with input function, AMS-221F Series” that improves seam quality and enables production control by interlocking the sewing machine with the JUKI’s exclusive application software.

Once the operator places a sewing material on the sewing machine and starts it, the sewing machine automatically carries out the entire steps of sewing sequence from sewing to thread trimming according to the stitch data, thereby contributing to the labor saving, deskilling and productivity improvement.
This sewing machine is available for a broader range of sewing applications such as sewing of air bags, attaching of labels, sewing of parts of sneakers, decorative stitching of jeans pockets. Stitches on these sewing materials / products constitute essential parts of their designs. This means that the beauty of “stitches” largely determines the quality of finished products.

The AMS-221F Series further enhances seam quality. The improved software for and the increased rigidity of the “feed mechanism” that moves the sewing material up and down and to the right and left not only help reduce the vibration during operation to 3.6 db but also increase accuracy of needle entry points. As a result, consistent seams can be produced without slippage of materials. In addition, the sewing machine is able to sew heavy-weight materials smoothly since the needle’s penetrating power into the material is increased by the newly-developed retry function.
Furthermore, the AMS-221F Series is the first AMS Series that introduces the highly-evaluated bird’s nest preventing function (for reducing tangling-in of thread at the beginning of sewing) of the JUKI LK-1900BNB (computer-controlled bartacking machines).

The “operation panel with input function” for enabling creation of stitch data has been renewed for improving operability and enabling two-way communication by means of mobile devices (such as Android devices) as well as the production control by means of the application software (JUKI’s exclusive application software). Information on the sewing machine operation is displayed real time on the mobile device to allow easy control of production progress. In addition, the aggregated data can be plotted on charts. This can be used for production improvement activities.

JUKI simultaneously launches the “Semi-dry head, post-bed, unison-feed, lockstitch sewing system with vertical-axis large hook with thread trimmer, PLC-2700V-7” that has also been developed for digitalization of sewing operation and is added with two-way communication feature.
The number of JUKI sewing machines incorporating the communication feature has now increased to nine including the aforementioned two new models. JUKI is continuing to support the customers with its “JUKI Smart Solutions” utilizing those sewing machines for further increase in productivity of sewing lines.

Increased rigidity and JUKI’s unique high-performance feed control system contribute to increased feed accuracy, thereby reducing uneven material feed during outward/inward sewing. Uneven material feed during outward/inward sewing is reduced. In addition, for the feed system of the feeding frame, either the intermittent feed or the continuous feed can be selected.

The newly-developed retry function contributes to increased penetrating power of the needle for sewing heavy-weight materials.

Since the counter knife position has been changed, length of needle thread and bobbin thread remaining on the material after thread trimming is reduced to 5 mm or less. As a result, securing of thread at the end of sewing is no longer required.
* The bird’s nest reduction function and shorter-thread remaining function cannot be used simultaneously.

Non-magnetic material is adopted to the throat plate auxiliary cover. As a result, the presser foot pressure or sewing performance is not affected by a magnetic resistance even when a magnet throat plate is used.

The IP-500 is the newly-developed operation panel that comes with a high-resolution touch-panel screen. The speed of response to the operation is increased.
The operator is able to input/edit data while visually observing the needle entry points. A file name consisting of 12 alphanumeric characters can be set to a piece of pattern data.
As a result, It is possible to manage the sewing pattern using the file name.
In addition, since the corrective measure is additionally displayed to the error message, easy resetting of the error is enabled.

Data on sewing machine adjustments made according to the product to be sewn can be transferred to a commercially-available Android tablet in contactless mode.
JUKI Smart APP allows you to send and confirm various data.

(４)Enhancement of the work environment

Reduction in the power consumption